The She-Wolf of the Vale

Open discussion of TWOW sample chapters and all the books!
Post Reply
6 posts • Page 1 of 1 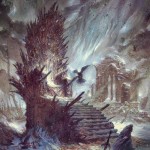 I was recently rereading the preview chapters for the Winds of Winter, and realized just how much Sansa Stark has grown on me, and how perfectly her character development has been done by GRRM. The Alayne chapter in the Winds of Winter depict this perfectly, from her banter with Myranda Royce, to her confrontation with Harry the Heir. There is no hesitation, no doubt, Sansa is finally playing the game and doing it well. I was curious to hear from everyone here what they anticipate for Sansa's story line, which is one of those drastically different from what has been depicted in the show and thus we're left in more suspense compared to certain other characters.

There are a few things I'm curious to see how they unfold....

Ser Lothar might take on much of the role in Sansa's storyline as Brienne takes on in the show. I think that this bit plus a few others are strong hints that Sansa's treatment from Harry the Heir is going to be pretty bad: perhaps not as bad as what she gets from Ramsay on the show, but still pretty harrowing from Sansa's point of view.

As for Myranda's role, who knows what that will be. Hopefully, GRRM will not waste too much time with irrelevant side plots, but the last two books argue against that hope! Ultimately, I expect that we'll see Sansa arriving at Winterfell with the Vale army at just about the right time to save Jon's forces from Ramsay's (much as we saw on the show). The issue is, will we see Sansa initially try to do this on her own without Littlefinger? If so, then Sansa trying to forge alliances with the Royce's and others could be an important part.
"If in the first act you have hung a pistol on the wall, then in the following one it should be fired. Otherwise, don't put it there."
A. P. Chehkov
Top

To be honest I wasn't that impressed with the preview Sansa chapter from WoW and I am a person who has never disliked Sansa the way some readers have. Apart from the inaccessibility of the Vale, I never thought that Littlefinger was oh so brilliant to take her there when it was where her mother's sister lived. Really, was everybody that dim in Westeros that no-one ever thought of looking for Sansa in the Vale? It was exciting when Littlefinger saved her from her nutty aunt (albeit in a way to his own advantage) and I guess that Sansa lying doggo as a bastard under an alias would be learning how people less privileged than the daughter of a great lord lived (I know her alias is as Littlefinger's alleged bastard daughter).

I think Wimsey may be right and that Sansa will end up at Winterfell somehow but going by the book Wood Witch's prophecy of a maid casting down a (presumably metaphorical) giant, I think it's possible that book Sansa may dispose of Littlefinger while still at the Vale.
Top

For me, it was not so much dislike of Sansa as dislike of Martin's writing of Sansa. Given what we've gotten on the show, I am beginning to appreciate the idea of the "Stupid Duckling" character arc. However, I think that the arc should have become apparent much, much earlier: really, by the 3rd book or so. And it really irritates me that he did not give her a "kill the girl, let the woman be born" arc in Crows & Dragons, which would have (or at least could have) given us some obvious inflection point where Sansa (and we) sees the stupid little girl die and the thinking woman start to emerge from the girl's ashes. But, no: we got Dorne & the Iron Islands....

Dame of Mercia wrote: ↑
Sat Nov 25, 2017 8:41 am
I think Wimsey may be right and that Sansa will end up at Winterfell somehow but going by the book Wood Witch's prophecy of a maid casting down a (presumably metaphorical) giant, I think it's possible that book Sansa may dispose of Littlefinger while still at the Vale.

That certainly is a possibility. I think that it will depend on how central Baelish is to Sansa's part of the story. On the show, he was the lynchpin: she did not want an alliance with the Vale in large part because she was so angry about the marriage Baelish had arranged. (And that is, of course, perfectly understandable: many if not most real people would act the same!) In the end, Sansa had to suck it up and take up his offer of alliance: but only after she learned the bitter lesson that unfed dogs do not come when called! I think that it would be both easiest and simplest for GRRM to go (or to have gone: let's hope that he's written all of this by now!) a similar route, and have Sansa's anger with Baelish over Harry cause her to not take advantage of his offer until almost too late.

That stated: GRRM could instead use Harry or Robyn in this capacity in someway that we cannot really foresee because, well, we'd have to read the early chapters of Winter to do so! For example, Harry could offer the key to getting the Vale troops to move north, and thus sort of take on both Littlefinger's and Ramsay's show roles. Someday, maybe, hopefully....

So, although I won't bet on what you are predicting, I certainly would not bet a heck of a lot against it, either!

"If in the first act you have hung a pistol on the wall, then in the following one it should be fired. Otherwise, don't put it there."
A. P. Chehkov
Top

Herewith a very belated reply from me, Wimsey. I suppose I was thinking of (book) Sansa disposing of Bealish in the vale by casting him down because the vale Eyrie is located very high, and I was thinking of a literal casting down but it could be a metaphorical one and be carried out differently.

I didn't mind the WoW "Mercy" chapter featuring Arya which (sort of) made it into the show but on the whole I have been rather disappointed with the pre-released chapters from WoW. I've long since gone past the stage that I eagerly await news of WoW - now it's more, if it's released it's released, if not, there are plenty of other books to read.
Top

As luck would have it, you get a very prompt reply from me!

Baelish will not be cast out of the Moon Door because they've already left the Eyrie for the Winter and will not return there until Spring. Moreover, I think that Baelish does have to hang around: otherwise, there is no reason for Sansa to not immediately take advantage of a Vale army. The story is going to hinge on these types of decisions, and although it will not have exactly the same plot as the show, I expect that it will retain the basic elements.
"If in the first act you have hung a pistol on the wall, then in the following one it should be fired. Otherwise, don't put it there."
A. P. Chehkov
Top
Post Reply
6 posts • Page 1 of 1